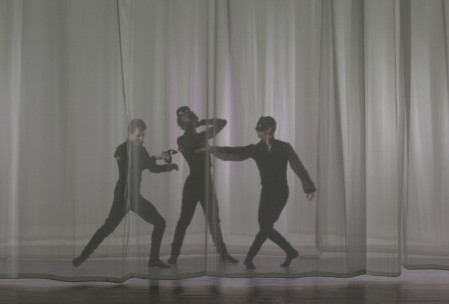 MUSIC BY PETER I. TCHAIKOVSKY

While staging a classic, the author (a director, a choreographer, a scriptwriter) always faces a diffi cult dilemma whether to develop the plot exactly as it is given in the source or to reinterpret it.

In the first case, they go along with the audience’s expectations but risk depriving their performance of some appeal. In the second case, they can hazard a critical form and offer their personal interpretation which might disappoint the audience disposed rather to get an expected original story than another view of it. Creating performances I have always given some latitude to my imagination and tried to avoid known dramatic formulas.

However, in ROMEO AND JULIET I was carried away with the original story, both its text and the scenery. I searched for a third solution, therefore. As Béjart said, the language of dance should not express complex concepts but basic ones: life, death, war, love, grief and joy. The Romeo and Juliet drama, both in the collective imagination and for me personally, is an archetype, an icon of a perfect love although (or just because) it is in conflict with the society and the world. Thus, my interpretation of the drama required a temporal rearrangement of the events (though they follow the traditional plot): the story starts with the culmination of the drama and then unfolds to emphasize the icon. The contrasts between life and death, love and war, day and night evoke in black and white scenery. True to the simplicity of the Elizabethan and Shakespearian theatre traditions, the latter tends to abandon heavy scenery structures and avail itself of a few actors engaged in different parts. – GIORGIO MADIA

Romeo & Giulietta 1880 (without the final coda)

Romeo & Giulietta 1869 (from beginning of exposure to the end)

This “Romeo and Juliet” prepared by the Fondazione Teatro Coccia presents itself as a very agile but also rich production, which intends to be accessible to everybody, to young and less young people, uniting the search for the new with sophistication and with the wealth of technical, theatrical and artistic contents.

… thanks to Giorgio Madia a choreography extremely original and with grand visual impact.

The choreographies by Giorgio Madia are characterized by a choreographic language, which is readable and usable in its modern and contemporary ciffre, that manages to convey emotions in a way only the art of dance can do.