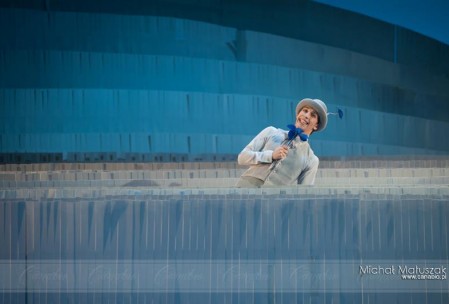 Assistant to the Choreographer: Nadia Prikkel

Giorgio Madia’s version of the ballet has its roots in the score by Ferdinand Hérold in the arrangement by John Lanchbery. The choreographer has kept all the classic highlights developed in the history of staging the title.

‘I try to be faithful to the culture of this piece. The audience cannot miss the input of different artists who made it a legend,’ declares Madia. ‘I wanted to have a countryside feeling on stage but a very clean and modern look,’ adds the Italian, ‘I asked the costume designer to combine the tradition of Polish folklore with Armani style. One of the crucial elements in restaging a classic title is updating it for the audience who deserves a modern touch of modern times they live in.’

Madia would not be himself if he only mirrored the original movements that has preserved in notations and ballet literature. His individual vision seems evident just as his artistic path. He ended the successful career at the age of 32 being still on the top. ‘I had a concept of never becoming an older dancer, so I decided to leave at the highest moment of my physical abilities. It is better to be a young choreographer than an old dancer. And I have always thought of myself as a man of theatre in general. I need to find different means to manifest my creativity. A dancer seldom has opportunity to present his creative power, everything depends on the choreographer,’ says Madia who works not only as a ballet choreographer and teacher, but also as a theatre and opera director. ‘Taking up different challenges in various genres fuels my professional life.’

Madia claims that he is inspired mainly by music, but he is always aiming for the fusion of music and not only dance, but the physical expression of the performers and the dynamic qualities of the set to stage something extraordinary which evokes a real and sensual experience within the spectators. — “Giorgio Madia’s Way”,  programme Opera Wroclaw

The show choreographed by Giorgio Madia is like a box of delicious chocolates. A tasteful wrapping in discrete colours, inside sweets from which our mood instantly improves as sophisticated, but at the same time natural flavor, that immediately would terminate with the confectioner who created them.  The Italian choreographer managed to conjure up in the Wrocław Opera not only a bucolic world accurately transcribing its roles for soloists and corps de ballet, but to create a new quality. Because LA FILLE MAL GARDEE is not as much a ballet as a dance theater, in which it isas important that the dancers express emotions alongside with caring about technique and good performance. […]

So watch the procession of dances, which is so beautifully set and timed for ensemble and soloists, performed with such an unforced simplicity, […]Giorgio Madia showed that the tradition values, but rememebers that a today’s staging of LA FILLE MAL GARDEE cannot resemble the museum.

In the quasi-trivial stories Giorgio Madia, […] conjured trinket full of freshness, youthful charm, fun and witty spice. Under Madia’s the Ballet of the Opera Wroclaw gave everything. […] Madia, who insisted before the premiere, that his FILLE MAL GARDEE will be a clean staging, which refers to the roots of ballet, its history, and Wroclaw showed, that he is close to a theater and fun convention.

Standing ovations accompanied by shouts of “Viva Italia!”, “You are wonderful!” – The director and choreographer of the show was Giorgio Madia from Milan. It’s his creative imagination to put 27 dancers in grey (first act) and yellow (second act) space. Within the two-colored vision appeared idyllic beauty of flexible bodies, agile movement, mime and the acrobatic skilled dancers oft he Wrocław Opera. Breakneck stunts, difficult choreography performed by soloists were often interrupted by applause.

A humorous story thanks to the director and the dancers of the Wrocław Opera has stood the test of time (it is worth noting that the premiere of “Daughters of poorly guarded” by Louis Hérold took place in 1789 in Bordeaux).