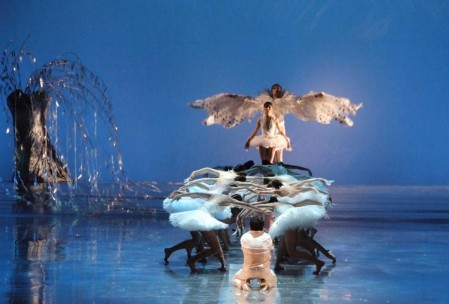 MUSIC BY PETER I. TCHAIKOVSKY

Assistant to the Choreographer: Adriana Mortelliti

Among all the famous ballets, I have always considered SWAN LAKEsacred and inviolable. For me it has always been a pure and perfect work. At least in my memories. I remember different versions of SWAN LAKE I had seen already as a child, hiding in the wings of La Scala. Later, I saw it at the age of fifteen in Saint Petersburg and at sixteen during a summer I spent in London. I was a fascinating show for me, altough I thought it is a little too long. I felt one should reject some tedious and reduntant fragments and preserve only the most captivating and noteworthy ones (maybe this was the reason for me to become a choreographer?).

Some time later, I was studying the techniques of ballet creation, and I saw classical works being reinterpreted. I then realized that it is not a sacrilege, and that SWAN LAKE does not have a predetermined, inviolable shape, neither in the scene sequence, nor even in the tempo. What is more, the contemporary dance is not as Tchaikovsky used to see it. What is interesting, during his times the work of Tchaikovsky was both structurally and emotionally so ahead of its time that it was even considered not suited for dancing.

The story itself has three alternative endings, considering only the classical versions! If one analyzes different productions including those male, rock, acrobatic or water versions, one may see that the possibilities are unlimited. I used to think I would never make an attempt on staging of SWAN LAKE. I considered it to be impossible, but then I started treating it as a challenge. It is very important for me to show to the audience, especially to those that have never seen the play, a modern version. I wanted it to satisfy contemporary tastes with a contemporary technique. At the same time, I wanted to retain classical elements that determine the timeless character of this ballet.

I made water the central element of the staging, as the history was inspired by German tales about witches and Slavic stories about rusalkas – girls that died of love and were condemned to wander lakes and rivers (as for example in the opera „Undine“). This motif also called „les ballerines près de l’eau“, was frequently used in romantic and late classicistic ballets. Swans are also unique creatures – they chose their partner for life. In the so called “white acts” (Act II and IV) girls perform in white tutus.

The entire work is connected by a motif of duality: night and day, black and white, Princess Odette and Prince Siegfried, the sun as a symbol of masculinity and the moon as a symbol of femininity. It is also visible in the opposition of the white and black swan, a lyric motif of suffering with seductive and aggressive motifs, introducing typically romantic conflict of good and evil. Tchaikovsky also presents a nostalgic idea that, “we continuously look into the past, we hopefully look into the future, and we are never satisfied with the present.” We also observe characters that like in other works of Tchaikovsky are victims of fate.

But most of all, it was the poetry, so important in music, and the elements of drama (that, in my opinion, place this work in the late period of romanticism, and not classicism) inspired me to tell this love story. – GIORGIO MADIA

Each of his works has its own character. When Madia creates something for a dancer, he has way of drawing out his original ideas. He seems to enjoy creating, and find it easy to make dancers. [… His] performances are of great humour and are very witty. Audiences of all ages enjoy his performances greatly.

Generally ballet is said to be difficult. But Madia’s choreography is so clear and concise it makes the difficult scenes seem easy.